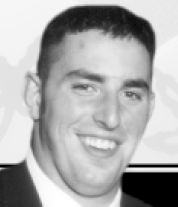 2003 Media Guide: Adam Olds heads into the fall hoping to land a spot in the two deep and compete for playing time behind incumbent Adrien Clarke at left guard … is a driven player with high expectations and is willing to work hard to improve … missed all of last year after undergoing arthroscopic hip surgery in September … was able to resume some practice late in the year, but was not able to play … the night and day difference in what he is able to do physically since the surgery gives the coaches hope that he can be a significant contributor … coaches like his work ethic and competitive attitude … one of two scholarship offensive lineman in the freshman class of 2001 … coming off a good spring showing.

2002 Season: Had surgery on his hip in September and wound up sitting out the entire season.

2002 Media Guide: Adam Olds was one of just two scholarship offensive linemen in the recruiting class last year (the other is Ryan Cook), both of whom were redshirted … did impress the
coaches last fall with his toughness and work ethic … certainly benefited in the spring from getting the majority of reps at left guard while incumbent starter Adrien Clarke was sidelined with a broken wrist … heads into the fall listed behind Clarke on the depth chart … also spent some time at center in the spring and impressed the coaches with his understanding of that position … added bulk and strength over the winter seem to have added to his confidence in the spring.