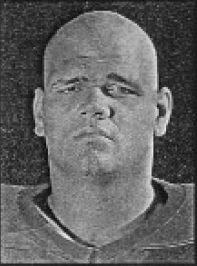 1996 Media Guide: Fifth-year senior walk-on who backs up Luke Fickell at middle guard … played in 10 games last year for a total of 66 minutes and was in on seven tackles (four solos and three assists) … longest appearance was 14 minutes against Iowa … had two tackles against both Boston College and Purdue and was credited with a pass broken up against Minnesota …. started out at the bottom of the ladder after transferring from the University of Indianapolis in 1992, but has steadily worked his way up the depth chart.

1995 Media Guide: Junior walk-on who is in his third year on the squad … heads into the fall as the No. 2 nose guard behind Luke Fickell … hard-working player who has developed into a good pass rusher … gives great effort day-in and day-out … originally enrolled at the University of Indianapolis in 1992, but transferred to Ohio State after the ‘92 season … practiced with the Buckeyes in 1993, but sat out the season in accordance with NCAA transfer rules … played in five games last year as a backup to Fickell, logging a total of 14 minutes … longest stint was five minutes against Houston … no tackles last year.

High school: Played defensive tackle and was a four-year starter … all-conference (Ohio Capital Conference) and all-district as a senior … helped the Cavaliers to a 10-0 record as a junior … also wrestled as a senior.

Personal: Wants to be a U.S. Marshall after graduation … enjoys playing basketball and reading (mainly biographies) as a way of relaxing.