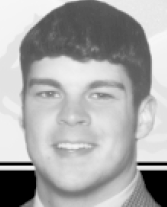 2004 Media Guide: Veteran receiver who has understudied Ben Hartsock the past two years and will now step in as the starter at tight end … started seven games a year ago when the Buckeyes opened in two-tight end sets … has played in all 27 games the past two seasons and has 12 career starts to his credit … a sure-handed receiver with excellent speed, has the ability to get open and is capable of making the spectacular one-handed grab … his combination of size and speed can poise significant match-up problems for opposing defenses … has developed into a fine blocker … Ohio State’s fourth leading receiver last year with 18 receptions for 190 yards and three touchdowns.

2003 Season: Played in all 13 games and started seven times … had receptions in all but two games (Iowa and Kansas State) … top game in terms of receptions was three catches for 37 yards against Bowling Green … longest play of the year was 31 yards vs. San Diego State … touchdown grabs against N.C. State (in overtime), Northwestern and Michigan State.

2003 Media Guide: Ryan Hamby heads into the fall as the primary backup for Ben Hartsock at tight end … played behind Hartsock last year and appeared in all 14 games … started the San Jose State, Penn State and Minnesota games when the Buckeyes opened with two tight ends … was used primarily as a blocker last season, but does possess excellent speed and is a gifted receiver … has the potential to be a dangerous weapon in the OSU arsenal if he continues to develop … had two receptions last year, both against Kent State, one of those for his first collegiate touchdown (on an 18-yard pass from Scott McMullen).

2002 Season: Made his collegiate debut against Texas Tech in the season opener … recorded his first career catch a week later against Kent State (11 yards) … logged double-figure minutes in 10 of OSU’s 14 games with a high of 20 on three separate occasions … biggest play of the year may have come against Michigan when he recovered a fumble in OSU territory after teammate Michael Jenkins had been stripped of the ball.

2002 Media Guide: Ryan Hamby will, in all likelihood, be the No. 2 tight end this fall behind Ben Hartsock … has great hands and outstanding speed and is a legitimate deep threat … is bigger and stronger than he was a year ago and has improved as a blocker … has the potential to be a dangerous weapon and should get better and better as the season progresses … has a bright future.

Personal: Born Oct. 30, 1981 … son of Steve and Debbie Michalski … grandfather Martin Michalski is a high school football coach in St. Louis, Mo. … aspires to become a teacher … in 10 years
he would like to be “in the NFL” … lists Europe as the place he would most like to visit … enjoys playing basketball, is an art fan, and collects DVDs.