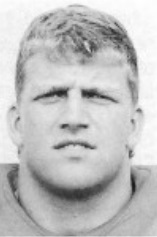 1989 Media Guide: Pat Thomas fifth-year senior who will get his first shot at starting this year … a good football player who has been a top reserve the past two years … has added 20 pounds since last year and has greatly improved his strength … a hard worker with a great attitude … versatile player who can also help at tackle if needed … coming off a good spring … bench presses 400 pounds.

1988: Played in all 11 games and started against Iowa as a tackle … wound up the season with 28 tackles, easily his best year as a Buckeye … had 10 tackles against Michigan.

1988 Media Guide: A solid football player who backed up Mike Sullivan last year … has a good combination of strength and quickness … coming off a good spring … hard worker with a good future.

1987: Played in 11 games, dividing his time between tackle and nose guard.

1987 Media Guide: Had an excellent spring practice and will challenge for a starting berth.

High School: Three-sport star, lettering in football, track and hockey … won all-state honors in football as a defensive tackle … football team was 38-4 during his three years as a regular.