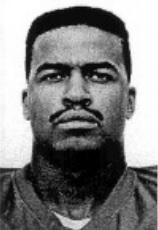 1989 Media Guide: Coming off an excellent year in which he was thrust into the starting lineup after Andy Gurd was injured … will contend with Gurd for the starting spot on the strong side … OSU’s most experienced returning linebacker … finished the season with 70 tackles, fourth on the team, and logged 194 minutes of playing time (compared to 24 minutes his first two years combined) … has good mobility and lateral movement.

1988 Media Guide: A good spring vaulted him into contention for a starting spot … probably the best speed of the inside linebackers … goes to the ball well and is a jarring tackler … played in all 11 games last year and earned a letter … had three tackles, including a sack, against West Virginia … OSU coaches expect great things.

1986: Appeared in seven games and had three tackles and an interception.

High School: Won all-state honors as a senior at Mackenzie, the same school that produced form OSU All-American Pepper Johnson … played tailback on offense and linebacker on defense … 105 tackles as a senior.