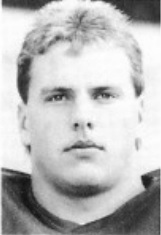 1989 Media Guide: Playing center for the first time this year … shifted from tackle in the spring and seemed to adapt quickly to his new position … lack of experience is his biggest shortcoming … will be a solid backup … also has experience at guard, making him one of OSU’s most versatile linemen … added 20 pounds between the 1987 and ’88 seasons.

1988: Played in 11 games, backing up Joe Staysniak at quick tackle … started the LSU and Illinois games … longest stint was 19 minutes against Illinois … spent the spring with the first unit when Staysniak was out with mono.

1988 Media Guide: Has added nearly 20 pounds since last year and has improved his strength.

1987 Media Guide: Played only in the Northwestern game last year.

1985: Redshirted … a persistent ankle injury kept him out of action … a bone chip was removed in the winter of 1986, causing him to miss all of spring practice.

High School: A two-year starter and an honorable mention all-state choice as a senior.