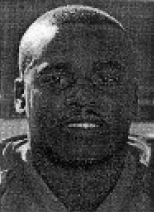 1997 Media Guide: Expected to be the backup tor Che’ Bryant on the strong side … a promising young athlete who made a name for himself last year with his play on the special teams … has good speed, a nose for the ball and is a punishing hitter.

1996: Saw action in all 12 games as a true freshman … logged a total of 22 minutes, most of that time coming with the special teams … finished his rookie year with eight tackles … recovered a fumble on the opening kickoff of the second half at Purdue, setting up the go-ahead touchdown for OSU.

High School: Prepped at Palatine High School where he played tailback, linebacker and safety … Ferocious hitter who tallied 150 tackles, three interceptions and 13 sacks as a senior … Rushed for 1,398 yards and 26 touchdowns as a senior and 2,893 his final three years with 52 TDs … All-America selection by USA Today, Bluechip Illustrated, G & W, The National Recruiting Advisor, National Bluechips and Tom Lemming … All-state and all-conference in 1994 and 1995 … League defensive player of the year in 1994 and North section defensive player of the year in ’95 … USA Today first-team defense … Rated the eighth best defensive back in the country by Bluechip Illustrated and the third best defensive back in the Midwest … Rated the second best weak side linebacker in the country by The National Recruiting Advisor … Rated the third best player in the Midwest by Prep Football Report … Rated the third best player in Best of the Midwest by the Detroit Free Press … Rated the 35th best player in the Midwest by SuperPrep … Earned three letters in football and four in track … Palatine captured the conference crown all four years he played, advancing to the playoffs three years, including finishing second in the state us a junior … High school coach was Joe Petricca.

Personal: Chose Ohio State because “I felt it was the right decision for me and everybody wanted to do the same thing, win” … Is undecided on major … Has one brother and one sister … Was born in Cleveland … moved frequently during his childhood (his father was in the Army), spending time in Hawaii, Kentucky, Virginia and Georgia in addition to Illinois … parents are Lavonne and Frank Burden … lived with John and Debbie Prutch (friends of the family) during high school and considers them his step-parents … relaxes by watching TV (comedy specials are his favorites) … full name is Michael Charles James Burden.