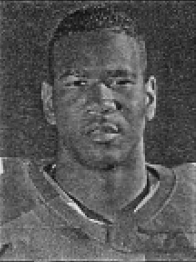 1997 Media Guide: Expected to take over for Damon Moore who moved to free safety in the spring …  also a valuable member of the special teams … has appeared in 23 games the past two years … is a highly thought of athlete.

1996: Backed up Moore last year on the strong side and played a total of 66 minutes in 11 games (he did not play against Michigan) … wound up the year with 17 tackles, including two tackles for loss and a sack … had four tackles (a career high) and recovered a fumble against Pitt … credited with three tackles at Purdue … recorded his first career tackle for loss against Minnesota and his first career sack at Illinois.

1996 Media Guide: Moved from free safely to strong safety in the spring and will vie for the starting spot … talented young player with excellent speed … also a valuable member of the special teams … played in all 12 regular-season games last year, but did not see any action in the bowl game … gets a great jump on the ball.

1995: Played in all 12 regular season games, but did not play against Tennessee in the Citrus Bowl … logged a total of 67 minutes, a career-high 13 of those coming against Iowa … 16 tackles (10 solos) and two interceptions on the year … … three tackles against Purdue was his top game in terms of number of tackles … had his first career interception and a pass broken up against Boston College in the Kickoff Classic … also had a pick at Minnesota, returning that one 35 yards to set up an OSU touchdown.

1995 Media Guide: Redshirted last year as a freshman … underwent arthroscopic surgery on his right knee in September and missed most of fall practice … appeared to be physically sound in the spring and should be full-go this fall … figures prominently in the coaching staff’s plans and should see a lot of playing time this year … has excellent speed, breaks well on the ball and is an instinctive player … one of the most highly recruited defensive backs in the Midwest as a high school senior.

1994: Impressive early and looked like he might get some playing time as a true freshman, but injured his (right) knee in practice and underwent season-ending surgery in September.

High School: A first team All- America defensive back selection by Parade magazine and Tom Lemming’s Prep Football Report … was named first team all-Ohio Division I (large school) on defense as a senior and an offense as a junior … also was named his district’s defensive player of the year in ’93 and was selected to the Detroit Free Press’ Best of the Midwest top 20 … recorded 120 tackles (61 as a senior) and had three interceptions his last two years … also a standout at running back who gained 1,042 yards as a junior, 77-1 as a senior and scored 20 touchdowns during his career … led his team to an 8-2 season and a spot in the state playoffs last fall and team finished 9-1 his junior year … played basketball in the prep ranks … high school coach was Thom McDaniels.

Personal: Hobbies include video games … plans to major in business … wants to go into investment management after his football career is over … lists former OSU All-America Jack Tatum as his favorite defensive back.