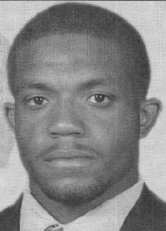 2003 Media Guide: Maurice Clarett is arguably the best and most complete running back in college football … will be a leading candidate for the Heisman Trophy and All-America honors in 2003 … named to several preseason All-America teams and voted the No. 1 running back in college football by The Sporting News in its College Football Yearbook … named to a first-team berth on the Football Writers and The Sporting News Freshman All-America teams in 2002 … also a first-team All-Big Ten pick and the Big Ten Freshman of the Year … a gifted football player who has the unique ability to energize the entire team … is blessed with tremendous patience and vision for a player so young … coming off a brilliant freshman campaign in which he set numerous Ohio State rushing records … finished his rookie season with 1,237 yards and 16 touchdowns rushing even though he missed all of three games and parts of two others because of injuries … joins Robert Smith as the only true freshman to rush for 1,000 or more yards in a season … broke Smith’s OSU freshman rushing record of 1,126 yards with a 119-yard showing against Michigan … runs hard, runs with power and has breakaway speed … fights for, and gets, extra yards after he has been hit … also an excellent receiver and blocker … studies the game intensely and is bent upon becoming the best running back who has ever played the game … scored two touchdowns, including the winning one, in the national championship game, and made the play-of-the-game when he wrestled the football away from Miami defensive back Sean Taylor after Taylor had intercepted an Ohio State pass in the end zone (Ohio State scored a field goal after regaining possession to take a 17-7 lead early in the third quarter) … enrolled at OSU at the start of Winter Quarter in 2002 and subsequently took part in winter conditioning and spring practice and made an immediate impression upon the coaches with his work ethic and understanding of the game.

2002 Season: Took the college football world by storm from Day One, ripping off 175 yards, including a 59-yard touchdown run, in the Buckeyes’ season opener against Texas Tech … shredded the Washington State defense for 230 yards – the second highest figure ever by an Ohio State freshman behind Archie Griffin’s 239 in 1972 – and the sixth best effort in school history … 119 yards against Michigan came despite playing with a painful shoulder injury that had limited him to just 16 carries the previous four weeks … played in 10 regular-season games, missing the Cincinnati game after undergoing arthroscopic surgery on his knee, and the Minnesota and Illinois games with a shoulder injury … also played sparingly in two games (Penn State and Purdue) because of the shoulder injury (a stinger to his left shoulder that first occurred on the Buckeyes’ final drive at Wisconsin) … set numerous school records, including most 100-yard games by a freshman (7), most points by a freshman (108) and most touchdowns by a freshman (18) … had 13 runs of 20 or more yards … started the season opener against Texas Tech at tailback, becoming the first true freshman at OSU to do so since Dean Sensanbaugher in 1943 … no telling how many yards he would have had if healthy, but he rushed for 100 or more yards in six of the first seven games he played in, and had a string of four consecutive 100-yard games going before being sidelined with the shoulder against Penn State … carried the ball 20 times against Michigan and showed no signs of an extended layoff … buoyed his teammates with a first-period touchdown run against Michigan and later had a 26-yard reception that set up the Buckeyes’ winning touchdown … also had 12 receptions for 104 yards and two touchdowns … rushed for 13 touchdowns in his first six games … had knee surgery the Tuesday before the Cincinnati game, but played the following week against Indiana and rushed for 104 yards and three touchdowns.

High School: USA Today Offensive Player of the Year … selected by the Associated Press as Mr. Football in the state of Ohio … also the AP co-Offensive Player of the Year … Parade Magazine All-American …one of the country’s top big backs … staggering numbers as a senior, rushing for 2,194 yards and 38 TDs … also caught 19 passes for 351 yards and six TDs … led Harding to an 11-2 record and a berth in the regional finals … rushed for 785 yards and eight touchdowns in the playoffs, including 401 yards and five TDs in the regional semifinals … amassed 4,675 yards and scored 65 touchdowns during his career … combines power and speed with fierce determination … enrolled at Ohio State at the start of Winter Quarter and actually counts back to the 2001 recruiting class … mother is Michelle Clarett … high school coach – Thom McDaniels … born Oct. 29, 1983.