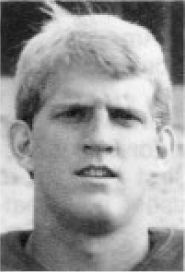 1991 Media Guide: Hopes to succeed three-year starter Greg Frey at quarterback … backed up Frey last year and played a total of 45 minutes in six games … easily OSU’s most experienced signal caller … final numbers last year were 15 of 26 for 195 yards and three touchdowns … pocket passer with a great deep touch … threw first collegiate TD at Boston College and had two scoring passes against Northwestern, completing five-of-six passes … strong-armed QB who can really thread the needle … can get you out of trouble in a hurry with his arm … lost 20 pounds over the winter in an effort to increase his mobility … Kent and his wife, Courtney, are expecting their first child in August.

1990 Media Guide: Outstanding quarterback prospect who sat out last year after transferring from Notre Dame … ideal quarterback for Ohio State’s offensive system … has the strongest arm of the OSU quarterbacks and is deceptively mobile for his size . . . tremendous deep “touch” … very competitive player … Sets Up quickly and has good field vision because of his size . . . pro-style passer … missed some valuable time during bowl practice with a sprained knee, but is coming off a good spring … had his knee scoped in early June.

1989: Transferred from Notre Dame and sat out.

1987-88: Played in 17 games during his two years at Notre Dame … No. 2 quarterback behind Tony Rice both years … started against Boston College as a freshman, his only start for the Irish.

HIGH SCHOOL: All-state and consensus All-America … honored by the Washington, D.C., Quarterback Club … one of the most sought-after quarterbacks in America coming out of high school … standout basketball player.

PERSONAL: Married … hobbies include playing tennis with his wife, Courtney, and ceramics.