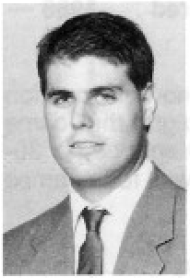 1991: Media Guide: Will back up Tim Williams in the placekicking department … appeared in four games last year and kicked off 13 times … has never tried a collegiate field goal or extra point … originally enrolled at Texas A&M and was a member of the Aggies team that won the 1987 Southwest Conference championship and defeated Notre Dame in the 1988 Cotton Bowl.

1990: Media Guide: The Buckeyes’ No. 2 placekicker . . . began his college career at Texas A&M and was a member of the Aggie team that won the Southwest Conference title and defeated Notre Dame in the Cotton Bowl .. . transferred to Ohio State and sat out the 1988 season… only appearance last year was a kickoff against Northwestern.

HIGH SCHOOL: Played his first two years in Austin, TX, before his family moved to Centerville … longest kick in high school was 48 yards as a senior … was also a running back in high school … Centerville was 10-1 his senior year … a country music fan … Jay Berwanger, the first Heisman winner, is his great uncle.

PERSONAL: His grandfather, Jon Hammond, played for the Detroit Tigers between 1935 and ‘40… Jay Berwanger, the first Heisman Trophy winner, is his great uncle.