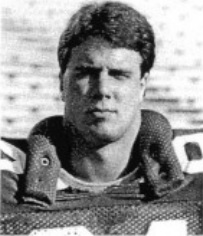 1987 Media Guide: Lettered as a freshman in 1985 playing outside linebacker and with the specialty teams … began the 1986 season at outside linebacker but moved to offensive guard to bolster that position … was moved to center in the spring of 1987 when a serious shortage developed at the position.

1986 Media Guide: Moved to defensive tackle in spring drills … quickly adapted to the new position … steady and dependable, he makes a minimum of mistakes … an honor student.

High School: A three-year starter in high school who played a variety of positions, but not center … graduated first in his class at Westerville North High with a perfect 4.00 average.

Personal: Hobby is flying … an honor student in college studying pre-medicine … his brother, Jeff, plays guard for the Buckeyes and his father, Jim Sr., was an all-American tackle at Ohio State in 1964.