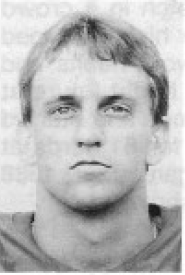 1990: Media Guide: The starting punter the past two years … averaged 40.3 yards per kick last year, bettering his 39.0 figure from the previous year … walked on in the spring of 1988 and won the starting job … converted to scholarship at the end of last year … has developed into a consistent performer.

1989: Media Guide: The regular punter last fall after walking on the previous spring and winning the starting job … punted 50 times last fall and averaged 39.0 yards per kick … net figure was 34.9 yards … worked hard in the spring to improve his consistency.

1988: Did all the Buckeyes’ punting … seven of his boots were touchbacks and 12 were downed inside the 20 … had a career best 70-yarder at Minnesota.

High School: All-state in baseball … lettered twice in football and twice in basketball … also started at wideout and caught 35 passes for 594 yards as a senior.

Personal: Hobbies are hunting and fishing … lists former OSU punter Tom Tupa as one of the athletes he admires most.