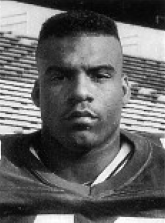 Post-OSU Update: Jayson Gwinn was killed in a car accident leaving a nightclub after the end of the 1993 regular season. Gwinn was reportedly distraught from the shooting of teammate Obie Stillwell, which occurred earlier that night.

1993 Media Guide: Good young football player whose only shortcoming is a lack of experience … will play behind Randall Brown and should see considerable playing time … has the size, speed and strength to be an excellent end … should be particularly effective as a pass rusher … came to Ohio State as a linebacker and was redshirted last fall … moved to end in the spring and seemed to have little difficulty adjusting to a down position.

1992 Media Guide: A Division I first team all-Ohio selection at linebacker … The Columbus Dispatch/Agonis Club Co-Lineman of the Year along with Buckeye freshman Luke Fickell … an honorable mention All-America pick by Street & Smith’s … was a defensive end before moving to middle linebacker as a senior … helped Brookhaven go 11-2 as a senior and advance to the state playoffs two straight seasons … had 163 total tackles as a senior and finished as the school’s second all-time leading tackler with 360 … also caught 20 passes for nearly 400 yards and six TDs his senior season at tight end … played basketball and threw shot put and discus in track … a high school teammate of Buckeye defensive back Marlon Kerner … high school coach was Gregg Miller … undecided on a major … has three brothers and a sister … born 11-25-73.