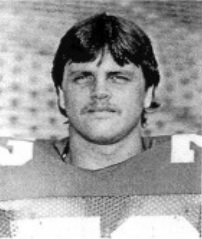 1986 Media Guide: Should become a standout tackle in 1986 … strong physically with surprising agility … although not heavily recruited, he impressed Ohio State coaches with his size, strength and desire … a key man in Ohio State’s 1986 offensive line.

1985 Media Guide: Improvement in all phases of the game in spring drills made him a strong candidate to start at right tackle … has impressive size and strength … has the physical tools to become an outstanding tackle.