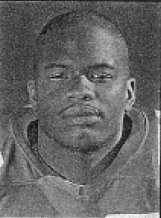 1995 Media Guide: Reserve defensive end on the strong side … played in four games last year, logging a total of 13 minutes … longest appearance was six minutes against Houston … had four tackles — one at Washington as a member of the special teams, two against Houston and the other vs. Purdue … good athlete who can also help on the special teams … had a productive spring and could be in for more playing time in the fall if he continues to improve.

Other: One of two married players on the squad (Ty Howard is the other) … his wife, Vonetta, who also attended MacKenzie High School, works in Columbus.

1993 Media Guide: A Blue Chip Illustrated magazine Dream Team member … had over 110 tackles, 10 sacks and four interceptions as a senior middle linebacker to earn all-state honors … recorded 88 tackles and five sacks as a junior … a four-year starter at Mackenzie … from the same high school as Ohio State freshman Larry Waldon and Michigan flanker Walter Smith … high school is the alma mater of former OSU All-America linebacker Thomas “Pepper” Johnson … high school coach was Bob Dozier … threw the shot put and ran the 100-meter dash on the track team and also lettered in volleyball as a prepster … has two brothers and three sisters … enjoys playing video games and basketball in his spare time … made the honor roll in high school and plans to major in education.