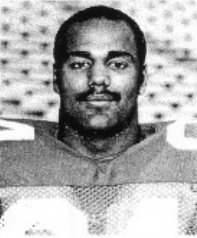 1987 Media Guide: Has won three letters and started nine games over his career at Ohio State … has played only on defense … was moved to offense midway in spring drills and will likely stay there.

1986: Shared the starting left tackle position with Mike Showalter … had 27 tackles, including two for lost yardage.

1986 Media Guide: Has played in 18 games for a total of 141.5 minutes in two seasons … a strong candidate to start this season.