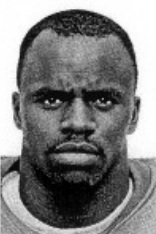 1989 Media Guide: In his fourth year as a starter and the Buckeyes’ most experienced defensive player … moves from safety to cornerback this year to take better advantage of his athletic ability … excellent speed … could play any of the secondary positions … has eight career interceptions … missed the spring game last April because of a severe concussion suffered in practice.

1988: Started the first eight games, but saw limited action the last three due to a hamstring pull … totaled 41 tackles … recorded a 10-yard sack in the closing seconds at Minnesota that helped preserve OSU’s 13-6 win.

1988 Media Guide: One of the top safeties in the Big Ten … hard hitter who has a nose for the ball … had three interceptions and four pass breakups last year … nine tackles and an interception at Michigan.

1986: Started 12 of the 13 games and had a 100-yard interception return for a TD at Purdue that tied the Big Ten modern era record … played a total of 333.5 minutes, tops for all freshmen and fifth-highest on the entire team.

Personal: Hobbies are jogging and fishing … has five brothers and one sister.