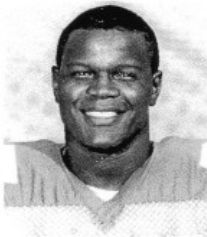 1986 Media Guide: Has won three varsity letters and was a starter in 1985 … has missed only one game over a three-year period … pleasant, easy to coach and eager to learn … has a special knack of coming up with big plays in critical situations … weighed 290 when he first enrolled … a dedicated athlete who gives total effort.

1985: Started all 12 games and played 425.5 minutes … made 37 tackles, and four lost-yardage stops including two quarterback sacks.

1985 Media Guide: One of the hardest working, most dedicated athletes on the team … has missed only one game over a two-year period … has a special knack of coming up with a big play in critical situations … gives total effort in all he does.

1983: Blocked a punt in the Minnesota end zone that gave Ohio State a touchdown.

High School: A three-sport letter winner at Marion-Franklin High … made 30 tackles in a game against the top-rated team in Ohio.