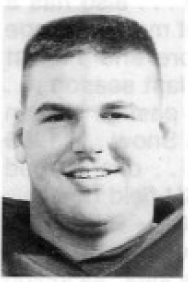 1990: Media Guide: The lone returning starter on the offensive line and the Buckeyes’ most experienced lineman…excellent college center…earned second-team all-Big Ten honors last year, but is still vastly underrated…does everything well…physical, smart and very competitive…wants to excel in all that he does…always pushes himself to go to the next level…in the mold of former OSU centers Jeff Uhlenhake and Kirk Lowdermilk … logged an ironman-like 320 minutes last year…originally a defensive lineman…a two-time member of the Big Ten’s All-Academic team…should be an Academic All-American this year.

1989: Started all 12 games and played 320 minutes, the fifth highest total on the team … enjoyed a very consistent year.

1989 Media Guide: Enjoyed an excellent spring and appears to be the successor to All-American Jeff Uhlenhake at center … tough, hard-nosed, competitive player … impressed the coaching staff in the spring with his overall improvement … smart player who can make the necessary checks at the line of scrimmage … originally a defensive lineman, but moved to center in the spring of 1987 … a three-time scholar athlete at OSU and a member of the Big Ten’s All-Academic team last year.

1988 Media Guide: Will back up Uhlenhake again this year … has improved greatly as a pass blocker … a mentally tough player.

1987: Saw limited action in eight games, behind Uhlenhake .. .gained valuable experience in the spring working with the first unit when Uhlenhake was injured.

High School: Won all-Ohio and honorable mention All-America honors as a senior … top gridiron thrill came as sophomore when East Liverpool snapped a 30 game losing streak and went on to win four games … 8-2 as a senior.

Personal: Wants to become a lawyer … hobbies are music, reading and snow and water skiing … favorite food is his mother’s banana split pie.