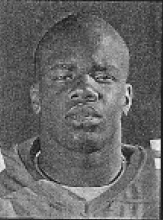 1997 Media Guide: Damon Moore blossomed into one of the top safeties in the country last year and should be a leading candidate for All-America honors this year … a jarring hitter who is tremendous on run support because of his speed and strength.

1996: Led OSU in tackles with 89, becoming the first non-linebacker since 1970 to pace the team … also led the Buckeyes in solos with 61 … set a school single-game record for a DB with 19 tackles in the win over Wisconsin … led the team in tackles five times, including 11 against Michigan and 12 against Arizona State in the Rose Bowl … led the Buckeyes in interceptions in 1996 with five, and tied a school single-game record with three at Iowa … also had three passes broken up and nine tackles against the Hawkeyes and was the Big Ten Player of the week … scored his first collegiate touchdown at Indiana, returning a fourth-quarter interception 28 yards to help the Buckeyes sew up a Rose Bowl berth.

1996 Media Guide: Emerged from spring practice as the probable starter at strong safety, replacing Rob Kelly, who moved to free safety in the spring … was the backup last year and played in all 12 regular-season games … finished the year with 30 tackles … recorded a career-high seven stops (including five solos) and forced a fumble against Purdue … picked off his first career interception against Pittsburgh and returned it 22 yards … also had a “pick” against Indiana (no return) … had tackles in every game except Penn State and Washington … a punishing hitter, who takes pride in his physical style of play … also plays on the special teams … good young football player.

1995 Media Guide: Redshirted last year … had a very good spring and heads into the fall as a solid backup, and possible starter, at strong safety … one of the Buckeyes’ most physical backs … made a number of big plays in the spring … also plays on the punt and kick return units … comes from a good high school program and has been a winner throughout his career (Fostoria was 37-2 during his three years as a starter) … anxious for his chance.

High School: An honorable mention All-America selection by USA Today and Tom Lemming’s Prep Football Report … earned first team all-state honors as both a junior and senior and was named the Division II Defensive Player of the Year in 1993 … as a senior, had 34 tackles and six interceptions as a defensive back, and played quarterback on offense, passing for 950 yards and rushing for 850 more … all-state honors were on offense his junior year … helped his team go undefeated during the regular season last fall and finish first in the final Division II state poll before the playoffs … team finished 13-1 his junior year and was state runner-up and was 14-0 his sophomore season and state champion … three-year team record was 37-2 … set a school record with 35 career touchdowns on offense, and also returned four interceptions for scores … also a three-year basketball letter winner who earned honorable mention all-state honors … high school coach was Dick Kidwell.

Personal: From a family of seven children … an older brother, Clayton, played football at Toledo … plans to major in elementary education and would like to coach some day.