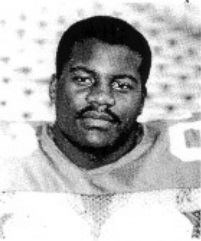 1984: Played in all 12 games and started in all but the Minnesota game … made 50 tackles and had four quarterback sacks … stopped opposing ball carriers for a total loss of 61 yards, most on the team.

Personal: Interested in electronics … ambition is to earn a college degree.