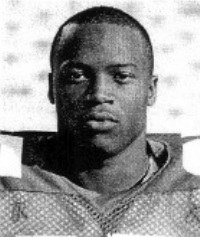 Post-OSU Update: William White was selected in the fourth round (85th overall) of the 1988 NFL Draft by the Lions. White played 11 years in the NFL, the first six with Detroit. He played in 170 games (132 starts), mostly at safety. White finished his career with 20 interceptions and 721 tackles. (updated: Nov. 2022)

1987 Media Guide: Has played in 35 games the past three seasons and has 35 starts … has a total of 981 career minutes for the Buckeyes … has 11 career interceptions and 137 tackles … consistently grades high in the coaches’ evaluation charts … steady and dependable … elected defensive captain of the 1987 Buckeyes.

1986: An ankle injury forced him to miss both the Purdue and Minnesota games.

1985: Led all defensive players in playing time with 334 minutes … made 51 tackles and led the team in pass interceptions with six.

1984: As a freshman started all 12 games and played very well … his 333.5 minutes of playing time was tops among all defensive players … consistently graded high in the coaches’ evaluation charts … intercepted three passes and led the team in batting down passes with seven … made 48 tackles and recovered two fumbles … intercepted a pass against Indiana and returned it for a touchdown.

Personal: Hobbies are music and basketball.