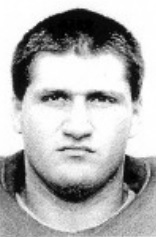 1989 Media Guide: Redshirted last fall … underwent surgery on a chronically sore right ankle in February and missed all of spring practice … demonstrated excellent speed and mobility last fall when at full strength … intense player, who seems to be very instinctive … will play the strong side.

High School: Twice selected as the Ohio Class A Lineman-of-the-year … a prep All-American as a senior … totaled 796 tackles during his four-year career … Jefferson was 45-2 during his four seasons there … had 15 career interceptions … also played fullback and rushed for 2,115 yards … ran for 815 yards and scored 15 times as a senior … made 115 tackles on defense … four-year first team all-Northwest Conference pick.

Personal: Bench presses over 400 pounds … his goal is to play in the Rose Bowl … admires Carl Lewis and Keith Byars … his older brother, Matt, signed to play at Ohio State but was forced to give up football because of a knee injury … plans a career in forestry or water conservation.