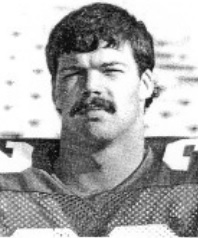 High School: Was honorable mention all-Ohio at Central Catholic in Toledo as a defensive tackle … moved to outside linebacker at Ohio State to take advantage of his quickness … ran the 100 and 200 meter dashes in high school … named Toledo “Defensive Player of the Year” in 1983.

Personal: Hobbies are cars and hunting … interested in the development of agricultural machinery.