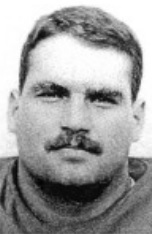 1989 Media Guide: Versatile, experienced athlete who is expected to back up Jeff Davidson on the quick side … came to Ohio State as a defensive tackle, but was moved to offense as a freshman … tried his hand at center and tackle before settling in at guard last season … intelligent player.

1988: Made brief appearances in two games.

1988 Media Guide: Has played guard, center and tackle with the Buckeyes .. .finished up last year at center, moved moved to guard in the spring and will play on the strong side this fall.

1986 Media Guide: Moved to offensive guard in spring drills and impressed the Buckeye coaches with his spirited play … now figures prominently in the plans either as a potential starter or in a top backup role.

High School: Played in the Big 33 All-Star game as a senior … earned three letters in track as a javelin thrower … blocked a field goal with 12 seconds left to preserve a two-point win in the district championship his senior season.

Personal: Enjoys all sports … father is a physician.