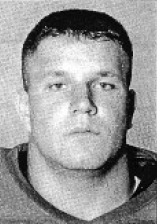 1991: Media Guide: Reserve middle guard who could challenge for playing time this fall … made significant strides in the spring … the biggest and potentially the most physical of the OSU middle guards … avid weight lifter … redshirted last year … wants to teach and possibly coach after graduation.

1990: Media Guide: Played his first three years of high school football in Vestal, NY (near Syracuse) and was a two-year starter on both offense and defense … Moved to Berwick, Pa., following his junior year and won all-state honors as a senior, when Berwick finished with a 14-1 record … sat out two games as a senior with a sprained ankle, but still had 68 tackles and seven sacks … named to the Bigger, Stronger, Faster All-American team… benches 450, squats 600 … also a standout wrestler, compiling a career record of 68-6 at the two schools … hobbies include reading and collecting baseball cards … an honor student throughout high school who is interested in majoring in either business or physical education.