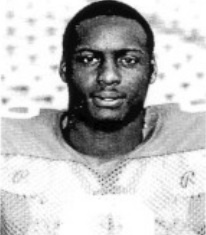 1986 Media Guide: Member of the specialty teams in 1983 and ’84 and was a reserve linebacker last season … an inspirational athlete who plays with great emotion … moved to linebacker at Ohio State to take advantage of his tackling ability (came to OSU as a safety).

1985 Media Guide: One of the hardest hitters in the Buckeye secondary … may be moved to an inside linebacker position to take advantage of his speed and tackling ability … bench presses over 300 pounds.

1984: Lettered as a reserve defensive back and member of the specialty teams … an inspirational player who made 18 tackles, caused three fumbles with hard tackles and broke up one pass.

High School: Was named Connecticut Co-Player of the Year as a senior … attended Bassick High in Bridgeport.