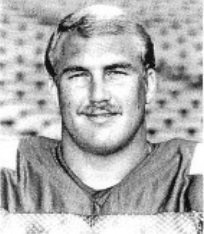 1985 Media Guide: Attended El Cerritos Junior College for a year and a half, playing two football seasons … enrolled at Ohio State in the Spring Quarter of 1984 … saw no action for the Buckeyes in 1984 … a knee injury the first week of 1985 spring practice required minor surgery … considered a strong candidate to start at guard.

High School: An all-C.I.F. tackle at Artesia High School in Long Beach … during the three years he played in high school (he did not play as a junior), his Artesia High teams posted records of 9-0, 9-0 and 9-2 … a versatile athlete who won nine letters.