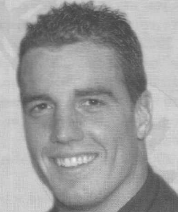 2004 Media Guide: Rob Harley is an intelligent and hard-working member of the Ohio State secondary … played in all 13 games last season … has made his mark with the Buckeye special teams units, starting on the punt block and kickoff return units in 2003 … an OSU Scholar-Athlete.

2003: Played in every game … had one solo tackle, coming at Indiana.

High School: Helped lead York to an eighth place finish in the state football playoffs as a junior … that season was named honorable mention all-state and an honorable mention All-American by PrepStar Magazine … started at safety but won his accolades as a wide receiver … also competed in track, helping lead York to a state championship and No. 1 national ranking as a member of the 4×100 and 4×200 relay teams.

Personal: Parents are Bob and Paula Harley … siblings are Kit (27) and Jenny (25) … is the great-great nephew of Chic Harley, who was Ohio State’s first three-time All-American (1916-17 & 19) and led the Buckeyes to their first two Big Ten championships (1916 and 17), which helped inspire the building of Ohio Stadium (which is known as the “House that Harley built”) … teammates call Rob “Chic” … has parents had tickets to attend the Ohio State at Illinois game Oct. 16, 1982, but Rob was born that morning so they didn’t attend (the Buckeyes upset No. 15 Illinois, 26-21 that day) … favorite sportscaster is Keith Jackson … favorite pro sports team is the Chicago Cubs … his favorite childhood memory is little league baseball.