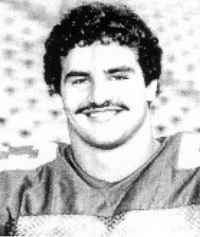 1986 Media Guide: Has not had sufficient playing time the past two seasons to win a letter … a strong showing n spring drills have projected him into the 1986 plans at center … a freshman redshirt in 1983 … played in only one game in 1984 and was sidelined with a knee injury that required surgery.

1985 Media Guide: A reserve center in 1984 who played only in the Northwestern game … while competing for the starting center position in spring drills, he tore a cartilage in his knee and underwent surgery … the operation was a success but he lost valuable practice time.

High School: Was an all-Illinois center at North High in Wheaton … his North team won the Illinois high school championship in 1981, finishing with a 13-0 record.

Personal: Enjoys all sports … admires Mike Webster in the NFL.