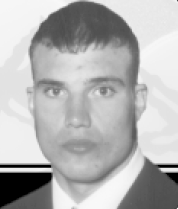 2004 Media Guide: Redgie Arden saw limited action in seven games in 2003, with most of his playing time coming with the special teams … hard hitter who can run … had two tackles on the year … had shoulder surgery following spring of 2003.

2003 Season: Settled into a defensive end spot … played seven minutes in seven total games as a backup on a veteran defensive front for the Buckeyes.

2003 Media Guide: Redgie Arden is a promising young prospect who has played three different positions in as many years at Ohio State, but now appears to have found a home at defensive end … recruited as a linebacker but was moved to tight end in the spring of 2002 where he remained until this past spring when he moved to the Leo, or rush end, position … coaches like his physical play and his ability to seek out and chase down the ball carrier … underwent shoulder surgery following spring ball so his status for the fall is uncertain … if able to return, he should figure in an already deep rotation and position himself for future playing time … also a solid special teams player.

2002 Season: Appeared in 11 games and started the Illinois game in a two-tight end set … had four receptions on the year, good for 50 yards and an average of 12.5 yards per catch … three catches against Indiana was his top game … also had a 14-yard reception against San Jose State … earned his first letter.

2002 Media Guide: Redgie Arden is a redshirt freshman who was recruited as a linebacker, but was moved to tight end midway through spring practice … made a favorable impression on the coaching staff and is expected to stay on the offensive side of the ball in the fall … has all the physical attributes to be a good tight end, including size, speed and hands … lacks experience at this level but did play tight end in high school, so the position is not completely foreign to him … a fine athlete, who is willing to play wherever he can best help the team … physical player.

High School: First-Team SuperPrep All-American … Division IV Associated Press co-Defensive Player of the Year … three-time First-Team All-Ohio at linebacker … 107 tackles, eight sacks and three interceptions as a senior … first player to verbally commit to OSU in the 2001 class … also played basketball and was a member of the track and field team.