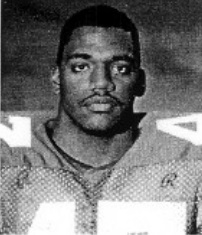 1987 Media Guide: Won a letter last season as a top replacement in the secondary … enjoyed an excellent spring practice and is a favorite to start at the rover position.

1985: Lettered as a reserve defensive back.

1984: Played with the specialty teams as a freshman.

High School: An outstanding two-way player at Central-Hower High in Akron … played quarterback and tailback on offense and cornerback on defense … named “Top Defensive Back” in the district in 1982 … led the team in tackles and interceptions both as a junior and a senior.