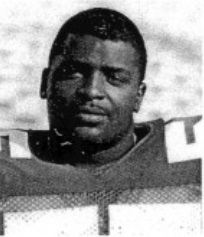 1987 Media Guide: Granted another year of competition in 1987 under the injury hardship rule … considered the top defensive tackle on the team when he is healthy.

1986: Started in the 1986 opener with Alabama in the Kickoff Classic but had to give up football because of knee problems.

1986 Media Guide: Missed all of spring practice because of an illness … can play nose guard if needed.