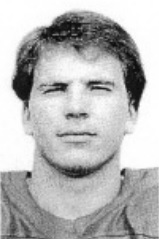 1989 Media Guide: Pat O’Morrow is a soccer-style booter with distance and excellent accuracy … handles all the Buckeyes’ place kicking chores … last year was his first as the full-time field goal kicker … this will be his fourth year as the kickoff specialist … no tee rule did not seem to bother him in the spring.

1988: Led Ohio State in scoring with 77 points … made 18 of 23 field goal attempts and all 23 of his extra point tries … 18 field goals tied the school single-season record … longest kick was 46 yards against Wisconsin … all of his misses were from beyond 49 yards … closed out the year with six straight field goals and 26 consecutive extra points … top game was four field goals against Syracuse … third in the Big Ten kick scoring and fourth in overall scoring.

1988 Media Guide: Expected to assume the extra point and field goal duties this year … made all three of his field goal attempts in the spring game, including a 43-yarder.

1987: Was used solely for kickoffs and did not have any extra point or field goal attempts.

1986: Underwent arthroscopic knee surgery three weeks before the season, but still played in the season opener with Alabama … made four of nine field goals, including the game winner in a 13-10 win over Colorado as time ran out, and a 40-yarder against Utah.

High School: A two-time all-Virginia selection by the Associated Press and a second team All-American as a senior … made 18 of 29 field goals during his career, including a school-record 48-yarder as a senior … also earned four letters in soccer and two in basketball.

Personal: Swimming and water skiing are his hobbies … his father is a college professor at Radford University.