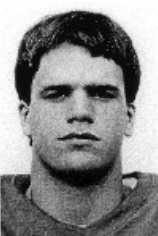 Post-OSU Update: Nick Cochran transferred to Youngstown State in 1990. He quarterbacked the 1992 Penguins team that was the DI-AA national champion runner-up. Cochran passed for 2,196 yards that season. After his playing days, Cochran became a physical education teacher and football coach at his former high school, Girard. (updated: Nov. 2022)

1989 Media Guide: Nick Cochran is one of three redshirt freshman contending for the No. 2 quarterback spot … excellent athlete who has demonstrated the ability to take charge … good option quarterback … stays in the pocket well and has good field vision … completed six of nine passes for 80 yards and a touchdown in the spring game.

High School: The Ohio Class AA Back of the Year in football and the Class AA Player of the Year in basketball as a senior … captained the football, basketball and track teams as a senior … passed for 3,051 yards and ran for 994 yards during his football career … once threw for three touchdown passes in less than four minutes to rally his team from a 21-0 deficit to a 42-21 overtime win.

Personal: His uncle, Mike Cochran, played for the Los Angeles Rams and his cousin, Vince Costello, played for the Cleveland Browns and the New York Giants … wants to become a coach.