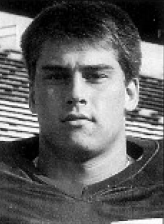 1993 Media Guide: Redshirted last season … played with the scout team as a defensive tackle but moved to offense in the spring and will fight for backup time at right tackle … needs to get
bigger, stronger and adjust to the move to offense, but the coaching staff is confident he will continue to progress.

1992 Media Guide: A second team Division III all-Ohio selection and a first team all-district pick … also earned all-league honors on both offense and defense … played tackle on defense and guard on offense … a three-year starter … was team captain as a senior … had 75 tackles in 1991, including 14 quarterback sacks … also handled his school’s placekicking duties … team was 9-1 his junior year and 9-2 in 1991 when it captured the school’s first league title in 21 years … played in both the North Central and Ohio North-South all-star games … wrestled as a sophomore and junior … high school coach was Scott Roddy … has five brothers and a sister … plans to major in business … born 11-16-73.