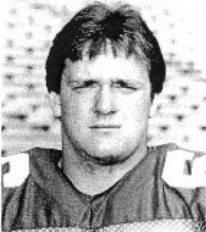 1985 Media Guide: Was tried at center in spring practice but a broken arm abruptly ended his play.

High School: Came to Ohio State as an outstanding three-year starter at Wapakoneta High … twice named conference “Offensive Lineman of the Year” in high school … wrestled in high school and was a weight man in track.

Personal: Hobbies are hunting, shooting and lifting weights … an honor student in high school … a business administration major but has a special interest in criminology … his high school weight was as high as 275.