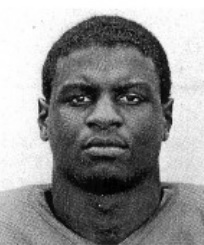 1986 Media Guide: An injury-free season in 1985 has projected him into a prominent role as a linebacker … quick, strong and aggressive … will challenge to start at one of the inside positions.

High School: An all-Ohio linebacker at Eastmoor High in 1981 … a three-year starter at Eastmoor, where his teams compiled a 27-6 record … injured his knee in the 1982 Ohio All-Star Game.