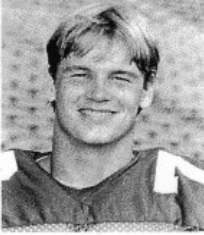 1986 Media Guide: Saw limited action in four games in 1985 … a stress fracture in his left foot knocked him out of spring drills … figured to enter spring practice as a strong candidate to start either at tackle or as a guard.

1985 Media Guide: A tackle in high school, he will likely play guard.

1984: Did not see any game action in his freshman season … coaches were hoping he would make a strong move in spring practice but an injury kept him out of action.

High School: Came to Ohio State from Loyola Academy, where he won Chicago All-America recognition … graduated in the top 15 percent of his class … captained his football and track teams and won eight letters combined between the two sports.

Personal: Hobbies are basketball and golf … has not declared a major but is interested in business and computer science … admires Dave Remmington of the Bengals.