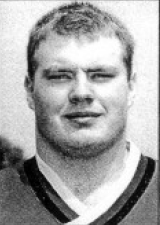 1994 Media Guide: Veteran lineman who will battle for playing time this season at left tackle … could not participate in contact drills during spring practice due to off-season left shoulder surgery … big, strong, aggressive player who plays with a lot of emotion … good run blocker because of his strength … has played in 27 games as a Buckeye, all as a backup.

1993 Media Guide: Veteran lineman who performed well during spring drills and will serve as Alan Kline’s replacement at left tackle … big, strong, aggressive player who plays with a lot of emotion … appeared in seven games for a total of just 17 minutes last season … good run blocker because of his strength … has the potential to be a good football player and hopes to give the Buckeyes some much-needed depth at tackle.

1992 Media Guide: Reserve lineman who is expected to play behind Alan Kline at left tackle … big, strong, aggressive player who plays with a lot of emotion … appeared in ten games last year, but his total playing time was just 28 minutes … good run blocker because of his strength … has the potential to become a good football player and is capable of giving the Buckeyes some much-needed depth at the fourth tackle spot.

1991 Media Guide: Will play behind Alan Kline on the left side … tough, young player who is very competitive … a good athlete and an intelligent player who has been quick to learn the OSU system … coming off a good spring … has all the tools to be an outstanding Big Ten lineman … redshirted last year.

High School: Three-year starter for the Big Blue, winning second team all-state honors at offensive tackle as a senior … played defense (tackle) as a sophomore, offense as a junior and both ways as a senior … had 98 tackles as a senior, including 11 sacks … team co-captain his last year … earned nine letters at Hamilton — four in football, two each in track and basketball and one in baseball … hobbies include fishing … wants to study computer science at Ohio State.