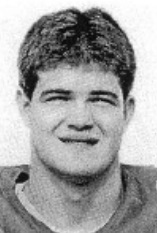 1989 Media Guide: Coming off ankle surgery in April that kept him out for the entire spring … expected to be fit for duty this fall … a good athlete who came to Ohio State as a quarterback, but was shifted in linebacker in the fall of 1987 … has added 20 pounds since last year and could play the rush side, although he is probably more suited to the drop side.

1988: Saw action in three games, some of that time coming with the specialty teams.

1987: Switched from quarterback to linebacker and did not see any playing time.

High School: First team all-Ohio in football and second team all-state in basketball … led Meigs to a 9-1 record his senior year, completing 68 percent of his passes and throwing for 17 touchdowns … threw for a career total of 3,004 yards and 28 touchdowns … made 56 of 65 extra points.