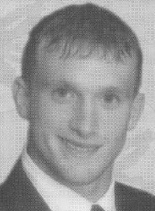 2004 Media Guide: Mike DeMaria is a walk-on running back who lettered twice as a member of the special teams … tough, hard-nosed, scrappy competitor … plays a vital role with the scout teams … was making a bid for more playing time last year, but suffered a sprained ankle in fall camp that kept him out during the first half of the season … coaches love his attitude and work ethic … is quick and strong and always gives the defense a realistic look … has played in 13 games the past two years … his lifelong dream is to carry the ball in a game for the Buckeyes … is the stuff movies are made of.

2003: Ankle sprain in fall camp sidelined him the first half of the season … played in six of the last seven games, logging a total of six minutes with the special teams.

2002: His first appearance as a Buckeye came against San Jose State in week seven … played in the final seven games of the season, all of his playing time coming with the special teams.

High School: A four-year starter in football … team MVP of his football, wrestling and track squads as a senior … qualified for the state tournament in wrestling as a senior (150-pound weight class) and in track (100-meter dash) as a junior and senior.

Personal: Is the son of James and Karen DeMaria … his father graduated from Ohio State’s dental school … has an older brother, Joe, as well as an older sister, Sara … lists Albert Einstein and John Milton as the two people in history he would most like to meet … graduates at the end of winter quarter in 2005 and hopes to go to law school.