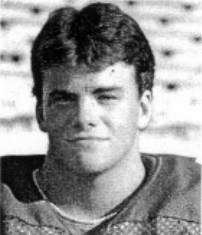 1987 Media Guide: Became Ohio State’s extra point and field goal kicker the sixth game of the 1986 season … made 26 of 26 conversions and 15 of 20 field goals to score 71 points, tops on the squad … made his first seven field goal attempts before missing a 39-yarder against Iowa … his longest field goal came on his first attempt, a 43-yarder against Indiana … made three of five beyond 40 yards.

High School: Played only one year of high school football at Finneytown High and kicked three of three conversions and one of two field goals as his team went 0-10.