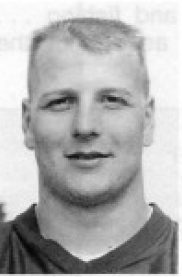 1991: Media Guide: Redshirted last year … did not move to offense until the third week of spring practice, but quickly made a favorable impression … good athlete who plays hard all the time and wants to get better … should be a quality reserve … came to Ohio State as an defensive lineman … showed promise last year, before injuring his foot and missing the last half of the season … enrolled in the spring of 1990.

1990: Media Guide: Enrolled in the spring and took part in spring drills . . . enters fall practice as the No. 2 end behind Alonzo Spellman … good combination of strength and speed … Showed signs in the spring of being an excellent pass rusher… very highly regarded out of high school, winning all state honors on both offense (tackle) and defense (nose guard) . . . 342 career tackles, including 138 as a senior… averaged three sacks a game as a senior.

HIGH SCHOOL: Very highly regarded in high school, winning all-state honors on both offense and defense … averaged three sacks per game as a senior … credited with 342 career tackles, including 138 (92 solo) as a senior … had 22 tackles (10 for losses) in his final prep game, a 14-3 loss to Dodge City … an honorable mention pick on the USA Today All-Star team. . . also won the state discus title in track.

Personal: Hobbies include pitching horseshoes and bocce ball … would like to coach and teach following graduation.