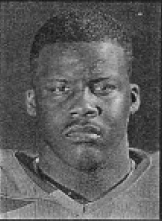 1995 Media Guide: Impressive in preseason camp last year, but then broke a bone in his right foot and was redshirted … missed spring ball because of academic responsibilities and is a question mark for this fall … a highly regarded athlete who could certainly help as a backup nose guard, but needs to focus first un his academies.

1994 Media Guide: USA Today’s Player of the Year in the Washington, D.C., area as a senior when he recorded 52 tackles and nine quarterback sacks from the defensive line … won player of the year honors from the Touchdown and Pigskin clubs of Washington … also was selected the Washington Post Defensive Player of the Year and earned All-America honors from Tom Lemming’s Prep Football Report, Blue Chip Illustrated and Super Prep magazine … helped his team finish 9-3 and win the city and division titles as a senior … was a three-year all-league selection and twice served as team captain … handled his team’s punting and place kick duties … completed all seven pass attempts on fake field goals, extra points and punts … also lettered two years each in basketball and baseball … high school coach was Bob Headen … lists Art Monk as the player he most admires.