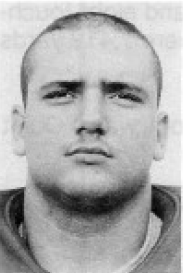 1992 Media Guide: In his third year as a starter … has played in all 36 games the past three years and is easily the Buckeyes’ most experienced offensive lineman … will line up on the left side, where he started all 12 games and played a total of 293 minutes a year ago … one of the Buckeyes’ strongest lineman (he can bench press 440 and squat 675) … has improved each year, especially in the pass-blocking department … hard working, very intense athlete … a two-time member of the Big Ten’s All-Academic team.

1991 Media Guide: Started nine games at quick guard last year … gained valuable experience and generally performed well in first year as a starter … will play the right side this year, but could swing if need be … tough, aggressive player with a great work ethic … a coach’s delight because he gives 100% effort every day … very strong player who squats over 675 pounds … good run blocker and has improved as a pass blocker … named to the Big Ten’s All-Academic team last year.

1990 Media Guide: Wasted little time in the spring establishing himself as the successor to all-Big Ten performer Jeff Davidson at quick guard … had an excellent spring and has a very bright future at Ohio State … the Buckeyes’ most aggressive and tenacious lineman … plays every down like it was his last … runs 4.6 and squats 676 … good at all phases of the game and will get better because of his work ethic … loves to play the game … selected by the coaching staff as lifter of the year after spring practice.

1989: Played behind Jeff Davidson (now with the Denver Broncos) … saw action in all 12 games, but for a total of just 29 minutes.

1989 Media Guide: Came to Ohio State as a defensive lineman, but made a smooth transition to offense … tough, enthusiastic player … should provide excellent depth on the quick side and has the potential to challenge for a backup spot … loves the game.

HIGH SCHOOL: Twice all-Ohio and Trumbull County Lineman of the Year … four-time all-league pick … the first freshman ever to start at LaBrae … also a standout performer in track, holding the LaBrae records in the shot put and discus … a two-time All-Ohio pick.