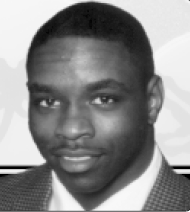 2002 Media Guide: Good young defensive back who was redshirted last year as a true freshman … spent most of his time in the spring at free safety … has good ball skills, plus good size and speed … tried his hand at punt returns last year and demonstrated the ability to catch everything that came his way … with his size and speed, he should contribute this year on the special teams … was the last freshman to commit during the 2001 signing period … had played only one year of high school football before coming to Ohio State so is still really a novice at the sport.

High School: A standout basketball player all four years and also ran track as a junior and senior … was talked into playing football by the coaching staff as a senior … played cornerback, running back, wide receiver and returned kicks in his only season of high school football … won all-state honors as a defensive back and all-regional recognition as a kick returner … team was 8-2 his senior year after going 2-8 the year before.

Personal: Is the son of Edna Boone … born Nov. 24, 1981 … enjoys video games, meeting people and playing basketball … favorite sports moment was streaking 80 yards on a reverse the first time he touched the ball in high school.