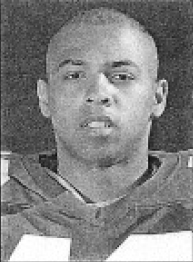 1997 Media Guide: Was a valuable member of the special teams last year and hopes to see additional playing time this year as a back-up wide receiver… emerged from spring practice as the No. 2 flanker … can also play split end … came to OSU as a running back and has also played cornerback … just wants to contribute and will do whatever is necessary to help the team … still looking for his first pass reception.

1996: Played in all 12 games as a member of the special teams and logged a total of 30 minutes … the biggest play of his collegiate career came at Iowa when he recovered a blocked punt in the end zone for an OSU touchdown … also forced a fumble against Pittsburgh … wound up the year with seven tackles, all solos.

1996 Media Guide: Playing his third position in as many years with the Buckeyes … began his career at tailback in 1994, but did not see any game action as a true freshman … was moved to cornerback in the spring of ’95 and appeared in 10 games last year with most of his playing time coming as a member of the special teams … showed promise as a cornerback, but was switched back to offense last spring in an effort to shore up the depth at wide receiver … enters the current season as a back-up split end … is a good athlete with the speed and hands to be an effective receiver … was in on six tackles last year in just 11 minutes of playing time … two tackles at Minnesota and against Indiana were his top games.

1995 Media Guide: Redshirted last year as a true freshman … was moved from tailback to defensive back in the spring … responded with an interception in his first practice as a DB … continued his impressive play in the spring and appears to have a bright future in the secondary … plays the boundary corner behind Ty Howard … the nephew of former OSU star Archie Griffin … grew up in Columbus, but moved to Seattle at age 11 … is the fourth Griffin to play for the Buckeyes, joining uncles Archie (who wore No. 45}, Ray (44) and Duncan (46).

High School: The first high school senior to publicly commit to the Buckeyes … played in just seven games as a senior due to injuries, but still rushed for 584 yards and nine touchdowns and earned all-state honors and All-America mention … also had 15 receptions for 185 yards and two touchdowns and played defensive back … earned all-county honors on offense as a senior and played on both offense and defense as a junior … rushed for 671 yards as a junior … played quarterback as a sophomore, and completed 96 of 140 passes for 521 yards and five TDs … Kevin also competed in track … plans to major in business … high school coach was Mike Thomas.

Personal: Was born in Columbus, but moved to the Seattle area when he was 11 … the nephew of former Ohio State tailback Archie Griffin, the only two-time winner of the Heisman Trophy who rushed for 5,589 yards during his Buckeye career … Archie is currently an associate athletic director at OSU … Archie’s brothers and Kevin’s uncles, Ray and Duncan, also played football tor the Buckeyes … father graduated from Muskingum College, where he played football.