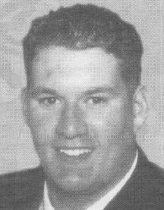 2004 Media Guide: John McLaughlin is a walk-on who is being counted on to provide depth at tackle – probably on the left side … has worked hard to put himself in position to receive playing time … has improved from both a strength and technique standpoint … originally walked on in 2000 … has played in just two games, but has persevered and been a valuable member of the scout teams, helping the defense prepare each week for its upcoming opponent … was recruited by several other schools, but has been a lifelong Ohio State fan and wanted to fulfill a dream by becoming a Buckeye.

2002: Made his collegiate debut against Texas Tech in the season opener.

High School: Was a starter at tackle and guard on the state championship team his senior year – the only year he played in high school.

Personal: Is the son of John and Vivian McLaughlin … his father graduated from OSU dental school … hobbies include playing golf (he has a best round of 70) and playing the saxophone.